You are at:Home»Lifestyle»Science and Tradition of Ear Piercing

Why Do We Pierce Ears?

The customs and cultures that we Indians follow, not only have traditional significance but scientific significance too. One such ancient custom that still holds its ground, is ear piercing. Followed since millions of years, this is a very customary practice in Indian and other ancient cultures.
During ancient times, both girls as well as boys used to get ears pierced. With the virtue of time, it is now limited to the girls only in most of the cases.
If you think that our parents did the ear piercing for the sake of custom only, then we would like to correct you here. Please note that there are various scientific reasons behind this practice. Curious about it? Stay with us to know more about this ancient practice.

Ear piercing – What does The Tradition Say?

Karnavedha or Karnavedham (Ear piercing in common language) is amongst one of the sixteen major samkaras or sacraments that every Hindu should do irrespective of the gender. Brahmins of all sorts used to get this samskara done during their course of life to attain enlightenment.
Ancient Vedas also have the mention of this practice in Brahmans and suggest this to open up the innermost part of the ear to listen the scared sounds. As per Hinduism, listening scared sounds helps one to reduce its sins and purifies the soul as well.

A must-have practice of ancient India

As per an ancient unknown writer, the Brahamana – A person, earlobes are not pierced should not be gifted anything during his Sraddha ceremony. It is also believed that all the accumulated merits of listening sacred sounds disappear at the sight of a “Brahmana”, if that person’s earlobes do not pass the rays of the sun.

The special ceremony to be done in a specific manner

Again, the procedure has to be done on a special day only. The medieval Hindu scriptures say that the ceremony of ear piercing should be performed on the 10th, 12th or 16th day after the birth of the baby. Afterwards, it can be performed during any odd years of the child, like 3rd year or 7th year.

Some more whereabouts from the medieval period

The scriptures also shed light on various other ear-piercing factors, which can be explained as:
1. In case of a male child, the right ear has to be pierced first while in case of a girl, the left ear goes first.
2. While ear piercing ceremony is going on, the child should be in his/her father’s lap with east facing.
3. As per the Smriti Maharnava, a copper needle is ideal to use for any child.
4. Susruta, the great ancient Ayurvedacharya, supported that the action should be performed by the expert hands of a surgeon only.

Though one can’t deny the traditional worth of ear piercing, we should not forget to delve deep into its scientific significance.
As per Indian physicians and philosophers, ear piercing helps to promote right intellectual development, boosts thinking and concentration power and improves the decision-making ability of an individual. The reason being is that our earlobes are the connection points where right and left hemispheres of our brain meets up. Those connective points are known as meridian points. When we pierce these meridian points, they get activated and augment the brain development rate. Though still, there are mixed opinions on the medical significance of this ritual. Let’s see what science says more about this:

Medical Backing from The Western World

The process of ear piercing also finds its concrete ground in ancient medical science. Hippocrates, the father of Western medicines, penned down in 470 BC that ear piercing could help in curing menstrual problems in women. In his support, Galen, the great Greek physician, surgeon, and philosopher, also mentioned the same in his ancient medical findings.

Chinese acupuncture technique involves pinching or piercing certain body parts to get relief from a certain medical condition. As per Chinese acupuncture theory, there are certain points behind our earlobes which contain nerves endings responsible for bronchial asthma, tuberculosis, and cough. When we pierce these nerves ending, one can get relief in all these medical conditions.

Researches in The Support of The Practice

As per the recent study of the Spiritual Science Research Foundation (SSRF), piercing on the left side of the ear helps an individual to have a good bout of positive and spiritual energy. In addition, it keeps people away from negative energy as well. 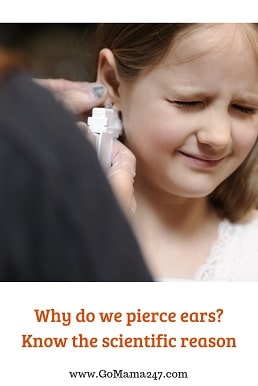 Through the ancient culture supports ear piercing to be done in infancy only, modern science allows it only after the baby’s first DPT vaccination only that too with the help of advanced ear piercing tools. We also recommend the same as tradition is best followed when it gets science support.