Inconvenience of Breastfeeding The Baby in Malls & Outings in India

Just yesterday I read in the newspaper that Tamilnadu government has declared that it will build breastfeeding rooms for lactating mothers at bus terminals in Tamilnadu. Really very important move by the government

This recalls my bad experiences with my 2 sons’ breastfeeding period. For first 4 months of delivery I hardly stepped out of house. Only for vaccines so if I needed to breastfeed the baby away from home, it was always hospital and fortunately there were feeding rooms. My hard experiences started when I tried to take my kids after they turned 4 months. I used to take them to restaurants and surely a baby below 6 months needs feed at frequent intervals and especially out of the house they used to be cranky. Have you ever seen any lactating room or special section inside any restaurant? I understand sparing a room for babies anyway who are not going to pay does not make sense from business point of view. OR does it???(At end of this post, you will understand what I mean). I had to rush to car looking around if anybody was watching and holding a cranky baby in an uncomfortable position. I used to think was I mistaking by stepping out of house?

Once in a seafood specialty restaurant, my car was parked very far, I took my crying baby and just when I about to ask the waiter if there was a dark corner where I could feed my baby, he directed me to toilet. The restaurant was not full and he could have made some arrangement but I was in no position to demand for it as my son was already crying & since left with no choice, I went to the toilet. I was heartbroken even to think that I was having my favorite food in a spacious and luxurious restaurant and at the same time my son, who I treat like prince at all time was having his dinner in a Toilet. I used to carry a breastfeeding cover but it was not possible to use that on the table as my crying baby attracted attention of people sitting around and I hesitated to put on cover with a fear, what if my baby tried to remove it.
That reminded me about having seen a wonderful design of breastfeeding cover in Japan like shown in picture which I could not buy in India. I didn’t have to use breastfeeding cover in Japan as there are lactating rooms at all places where ever a mother and baby can go. It’s a paradise for babies. 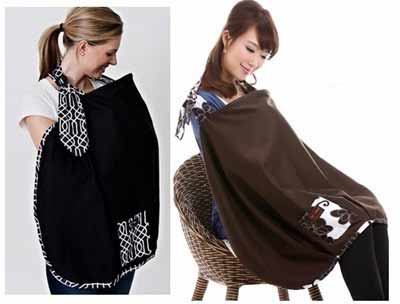 Now talking about lactating rooms in Indian Shopping malls, there are hardly any malls providing lactating rooms in spite they have baby shopping stores all over. Once I went to a mall in Mumbai with my 6 months old baby. It took me 2 hrs to finish shopping and by that time my son was hungry so I rushed to the feeding room. It was horrible and stinky though it looked clean but because it was so small without sunlight and fresh air never reached the room, it was very suffocating. I saw there a cockroach also. Again without any choice, I fed my baby and left the room.

Next time I went to some other mall and before going I called their help-desk to check if they had a breastfeeding room. They didn’t have separate room but they promised to do the arrangements. After shopping, I took my son to so called feeding room, it was again another bad experience. It was a dry garbage dumping room. Like boxes and plastic bag that room looked like it was not cleaned everyday but it was at least not suffocating. I took an oath I would never ever take my son out to any public place where I would face trouble breastfeeding my son.

I discussed this with my son’s pediatrician Dr. Shama Kulkarni, a lactation consultant head. What she told me really made sense. She said India is still a mother friendly place, If we compare with western countries they are not allowed to breastfeed baby publicly. Doctor also told me one thing which made me think : This is the main reason why Indian women wear saree. Our traditional dress Saree was designed. in a way that a mother could feed a baby easily covering her body well even out in public. It is not suffocating for baby also. But then I can not start wearing saree as I am not used to it not even the feeding special salwar kurtas are very helping. We should have a breastfeeding cover which was mother and baby friendly. Why we don’t have them in India? Also why don’t we have breastfeeding area in shopping malls or restaurants. I don’t mean a separate room but at least a bench covered with curtains? It is easy to maintain and clean too. Also, it wont take any extra space. They can let this space be used for anyone when not used for breastfeeding.

Current situation forces us to feed our babies inside cars, toilets, dumping areas, why? Because babies don’t complain or as a mothers we don’t want to fight? I am not saying we need baby feeding rooms all over public places, restaurants, shopping malls but at least some easy arrangement? Isn’t it easy and welcoming for little ones? In fact all these places can advertise that they are baby friendly and they treat them same as those who pay them.