You are at:Home»Baby»Baby Names»Gods and Goddesses»Unique Baby Girl Names Inspired by 9 Forms of Goddess Durga

The joyous festival of Navratri is hugely celebrated for 9 days throughout the country where the Hindu community worships 9 different avatars or forms of Goddess Shakti. Welcoming a baby girl during this nine-night long auspicious occasion is indeed a blessing from the Goddess and to add to this happiness, we have created a list of names inspired by 9 different forms of Goddess Shakti that can help your little one overcome the hurdles in life and cultivate positive virtues.

What to Name a Baby Girl born during Navratri? 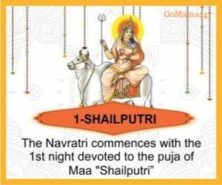 The first day of Navratri is dedicated to Maa Shailaputri who has the collective power of the Trinity Gods, Brahma, Vishnu and Mahesh. Shaila means mountain and Putri signifies the daughter. You can consider the names like Adrija (Adri means mountain and Ja denotes born)or Adriti for your baby girl if born on 1st day of Navratri that are epithet for Goddess Shailaputri. 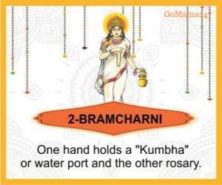 Born in the home of King Daksha Prajapati, Maa Brahmacharini is the second form and unmarried avatar of Goddess Shakti. The Goddess bestows her worshippers with peace, prosperity, happiness and grace. The name inspired by this avatar of the Goddess can be Nivara निवरा/Kanyakaकन्यका that signifies a virgin or unmarried girl, for the girls born on 2nd day of navratri 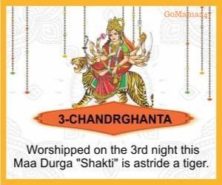 This avatar of the Goddess signifies bravery and represents beauty and grace. The Goddess is also known as Ranchandi and Chandika and her third eye is always open to destroy the evil powers or demons. Chandraghanta means one who has the shape like a half-moon like a bell. The names inspired by the Goddess are Sharvarisha, Drapsa, Sthuma and Himkara and all of these names signify the moon, spark or light, recommended for the little ones born on 3rd day of navratri. 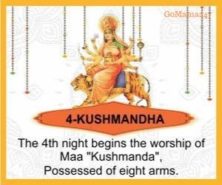 The fourth day of Navratra is dedicated to the fourth avatar of Navdurga. Ku means little, Ushma is energy and Amnda is the cosmic egg. This avatar of Devi Shakti is believed to be the creator of the world. To grace your little baby girl with the blessings of the Goddess, you can consider the names like Akhila (means the universe), Sarva (whole/universe) and Sarira which means tide, sea or universe. These 3 names are most suitable for the girls born on 4th day of Navratri. 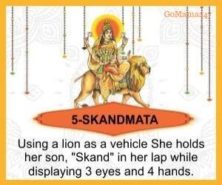 Devi Skandmata is the fifth avatar of Goddess Shakti. Skand is Lord Kartikeya, the war God and Mata is the mother. Lord Kartikeya or Lord Murugan is one of the widely celebrated deities in Hinduism and you can find several names of the God likes Uma and Netra from our list of Kartikeya names for Indian babies – Uma https://www.gomama247.com/baby-girl-names-inspired-by-lord-murugan/ 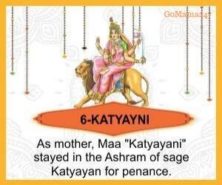 The sixth form of Goddess Shakti is Maa Katyanani who is also known as Adi Parashakti. She is the daughter of Katyayana Rishi and rides a lion. The Goddess has been described as the deity with four hands, holding sword and lotus. The Goddess exhibits courage and strength and hence a great fit for your little baby girl’s name. Katyayani is a very trendy unique name best suited for the baby girls born on 6th day of Navratri. 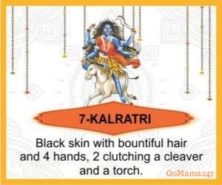 The fearless avatar of Devi Shakti has been described as the deity with a dark complexion and disheveled hair and tongue out in Hinduism. She is the fiercest form of Devi Durga. The deity is often praised in the Mantra क्षीवा ॐ क्षीवायै नमः।. So Kshiva is a choice for you if your daughter is born on 7th day of Navratri. 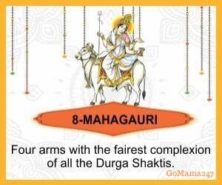 The eighth manifestation of Goddess Shakti is believed to fulfill all the desires of her worshippers. She represents peace, prosperity, calm and intelligence. The literal meaning of the Goddess’ name is Shweta or white. We suggest Dhyushi which means Dazzling White and Kasha which means White Flower as name for the babies born on 8th day of Navratri 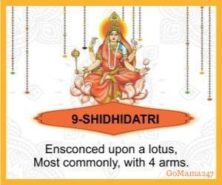 The ninth and last avatar of Goddess Shakti is Devi Siddhidatri who is worshipped on the last day of Navratra. The four-armed deity sits on a lotus and denotes perfection. She holds a book, a lotus, a discus and a mace in four of her hands. The deity has divine healing powers and she bestows her worshippers with a blissful state of mind. Varda: ॐ वरदायै नमः। is name of goddess Saraswati too, meaning blessings. Siddhi means enlightenment and Dhatri is a rare name meaning: ॐ धात्र्यै नमः। The Goddess Laskhmi Who is the Courage
Navratri which means the nine auspicious days when all the nine forms of Navdurga are worshipped, helps the worshippers rejuvenate the mind, body and soul through spiritual practices, prayers, meditation and fasting. All the things we do while worshipping the nine avatars of the Goddess connect us with our souls and help us achieve her blessings for a healthy and prosperous life. These names have a spiritual significance and have the power to shape a personality for a brighter future. If you liked these names, let us know your favourite ones or help us make the list better with additional names suggesting in the comments.